A simple shmup reminiscent of the arcade era.

Galaxis was made using the Lazy Devs Shmup Tutorial on YouTube.

Galaxis can also be played on Lexaloffle, home to all the Pico-8 games!

In the Menu screen:

Your mission is to fly into enemy space and destroy the aliens that pose a threat to all life on Earth!

You must wipe out all enemies to clear a wave.

Clear all 9 waves + the final boss to win!

You start with 3 lives (indicated in the bottom left).

Getting hit by an enemy or enemy bullet costs 1 life.

When you run out of lives, Game Over! You will have to start from the beginning.

You start with 1 missile, but you can hold up to 3 (indicated in the top right).

You start with 0 power with a max of 9 (indicated in the top left).

Collecting a Power Pip increases your power by 1. Getting hit costs 3 power.

Enemies will sometimes drop a Power Pip when destroyed.

Destroying an enemy while it is attacking increases the odds of a drop.

When you have full power, you will automatically enter Power Mode, tripling the shots from your main guns.

After 6 seconds, you will exit Power Mode. Time spent in hyperspace (between waves) doesn't count.

Collecting Power Pips while in Power Mode extends the timer. Getting hit reduces it.

Every 10,000 points a bonus missile will appear.

Damaging a bonus missile enough turns it into a bonus heart (1-up)!

Be careful! Damaging a bonus heart too much destroys it!

Destroying an enemy while it is attacking increases your chain (indicated below score).

Continuing to destroy enemies during their attack awards bravery points based on your chain.

Watch out! If you destroy an enemy during its attack, another enemy will immediately attack in retaliation!

If an enemy completes an attack run, you will lose your chain.

If your score is high enough, you will be able to enter your name in the highscore table!

All art, music, sounds, and code were created by R. Glenn Cagle inspired by the work of Krystian Majewski on Cherry Bomb as part of the Lazy Devs Shmup Tutorial on YouTube.

To Krystian Majewski, the best coding tutorialist on YouTube,

To all my students and coworkers who helped me playtest,

And badmini99, the only person other than me to have beaten the game before its release,

And ALF, a legend.

Important note: The paid download of this game doesn't come with any new content other than the ability to play offline. If you enjoyed playing the game, please consider paying for download access. Thank you!

In order to download this game you must purchase it at or above the minimum price of $2 USD. You will get access to the following files:

Would it be possible to make the pico-8 cart available for download?

You should be able to download this PNG and open it in Pico-8. Thank you for considering paying for the itch download! But this was already available on Lexaloffle, so there's no reason for me to charge you for it haha.

Let me know if you have any trouble opening it. 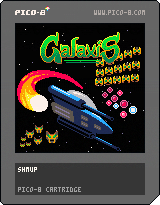 10/10, rage inducing, absolute nightmare, will be recommending cause it was also too fun to stop. Imagine not knowing who ALF is.

Great game, I loved :
- The visuals, cohesive color palette and HUD
- The starfield changing colors, nice touch
- The bomb being an actual missile that accelerates and collides with enemies.
- The power system

I thought the base enemy were too spongy and some waves a bit too big, slowing the game down.

But overall a great game !

Thanks for playing and for the feedback! I designed the enemies to be easy to kill if you had the skill to line up both shots to hit simultaneously, but I can see how that would feel spongy to a first time player.

This is a classic arcade game basically! It's fun!